This chapter is intended to introduce or refresh some useful electronics concepts with emphasis on design.

Feedback is a very common technique that is used extensively in electronic circuits. The basic principle of feedback, as its name states it, is to feed the output of the circuit back to an input so as to compare the actual output to the target and use the difference information to modify the output. This is a powerful technique to improve output accuracy with respect to a circuit that would not use feedback. When feedback is used, the circuit looks like a loop and is often called servo-loop, feedback loop and sometimes simply loop.
When a loop is used, a concern always exist with stability. If the output phase shift is large enough, the correction may not drive the system in a stable state but it may enter into oscillation.
The general schematic for a loop is: 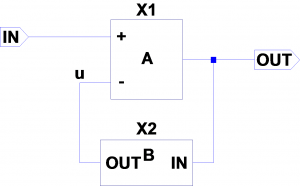 When a generator exhibits an internal impedance Z, a question can be:

What is the best possible load impedance for that generator?

To answer this question, let's start with an experiment. Let's consider a circuit built from:

What about the voltage across load, the current through load, the power dissipated in the load?

This derivative value is zero if RLOAD = RINT

At this point, PLOAD is:

The impedance and gain versus frequency characteristics of simple passive circuits are important as they allow building equivalent schematic and simplify circuit calculations.

This filter filters out low frequencies. Schematic is:

Input and output impedance expressions are:

It must be noted that source and load impedance can significantly impact the transfer function.

This filter filters out low frequencies. Schematic is:

Input and output impedance expressions are:

It must be noted that source and load impedance can significantly impact the transfer function.

When a resistor and a capacitor are connected in parallel, resulting impedance versus frequency is:

If driven by a current source, this cell achieves a first order low-pass filter function. Cutoff frequency is:

This effect was originally a parasitic effect. In ICs, it is a common practice to use this effect.

If an amplifier with voltage gain A, infinite input impedance and negligible output impedance is shorted by an impedance Z between input and output:

Input current, by assumption, flows only in impedance Z:

And we know that:

In case A is negative and large: ZIN ≃ Z |A|

Basically, the Miller effect dramatically reduces an inverting amplifier input impedance if some coupling exists between input and output that behaves like an impedance.

In particular, if coupling impedance Z is a capacitance C:

Which is equivalent to the impedance of a capacitor:

The input capacitance appears multiplied by the amplifier gain! This is a concern for any common-emitter or common-source amplifying stage as they are inverting. The collector-base or drain-gate capacitance causes an increase in the input capacitance that can, in turn, reduce the bandwidth or the slew-rate by a load effect on the driving stage.

In ICs, Miller effect is often used to stabilize loops as it allows large apparent capacitors without using large capacitors, saving silicon area then minimizing cost. The loop architecture is generally tailored so as to create a dominant pole at the input of a large gain stage by using Miller effect. Sometimes, an extra amplifier is used just for the purpose of stabilizing the loop since the amplifier that multiplies the capacitance is often smaller than the equivalent capacitor. The drawback of this method is the amplifier current consumption.

The so called “cascode” amplifier has been created long time ago to limit the parasitic Miller effect. A cascode amplifier is built by stacking a common emitter/source amplifier and a common base/gate stage:

The common base/gate stage does not exhibit any parasitic Miller effect since its input is driven with a constant voltage and can be bypassed suitably.

In addition, the common base/gate transistor can be made small as it does not impact the overall noise significantly and this improves the output cutoff frequency.

The two drawbacks of the cascode amplifier are: